All the WalksThe alphabetical list of where I've walked 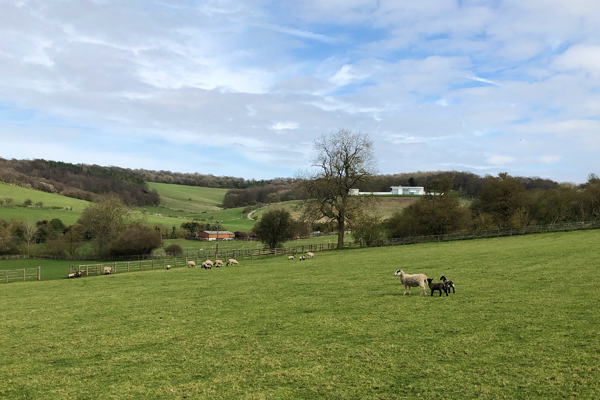 A great walk in the Chiltern Hills.  Starting from the King William IV pub and taking in parts of The Chiltern Way Southern Extension.  The route passes the former home of Ian Fleming (creator of 007) and Black Adder star Rowan Atkinson.  There is a fair amount of up and down on this route, but nothing over the top.

This walk starts from The King William IV in the tiny village of Hailey near Wallingford which has some lovely view and is great for a summers day sitting out the front.  From the front of the pub turn left on to the Chiltern Way Southern Extension (CWSE) and east and continue along the track way as it makes a stead climb.  The CWSE turns off to the right after some houses, ignore and continue along the track for another 2km passing through Bixmore Wood.  Take the signposted path on the right, just before a house and well before you get to Homer Farm.  This will take you down past Fludger's Wood.

You will descend on a path alongside the ultra modern starkly white house at Handsmooth.  This was built by star of Black Adder and Mr Bean Rowan Atkinson.  It caused a lot of controversy at the time and does stand out rather.  I like it though.  He must get some great views.  Turn right and continue past his front gate and Handsmooth Farm.

Once you get to Wellplace Farm turn left in to the stables and through various signed gates that climb you up the hill.  The route stays in the fields until the very top where once you go through a gate it gets a little confusing.  Turn right and then follow the fence line until you climb in to the woods.  Someone has helpfully put a map up for those who are lost!  Turn right and begin to go down hill.  There is a significant ditch with a road the other side of it. Keep to the right hand bank, the path is pretty undefined but winds its way through the trees eventually bringing you out on to the road and Warrens Chase.  Turn left (south) to once again pick up the CWSE.  A bit more climbing here up Berins Hill.  Stay with the CWSE as it continues along Braziers Lane.  Eventually the CWSE leaves Braziers Lane and continues south, stay on Braziers Lane heading West passing some cottages and eventually Braziers Park itself.  This once belonged to the Fleming family and was where Ian Fleming, the author of 007 James Bond was born.  Other interesting things happened here involving Mick Jagger and Marianne Faithful, so it's worth a quick read up before heading on.

Turn right after the big house and head north along the road towards Ipsden.  It's a busy road at times, so take care.  For a short section you can take a footpath in the woods to the right of the lane.  You might even see the leprechaun doors!  Cross Garsons Lane and continue along the path as far as the village of Ipsden.  Just before the little wooden hall you will see a footpath turning right.  Take this and take the steady climb all the way to the top where you will once again pick up the CWSE.  This time take it north.  With a short dog leg you climb through a field and will see the pub at the top to the left.  When you get to the top of the field you rejoin a track, turn left and a little bit further along you are back at the pub.  Well done.